Charley has been gone for over 28 days. The last time I saw him, hugged him, kissed him, called him “Chuck” was 45 days ago. One week ago yesterday, I drove to Dahlonega to pick up his ashes from the funeral home. No one was there–they were out on a pick-up call–and I had several hours to waste. Tyler encouraged me to drive to Alpenrose, Betty’s and Charley’s house, in Suches and pick up a few things.

The last time I was alone at that house was July, 2005. I was pregnant with the twins and on limited physical activity. Tyler was going out of town and didn’t want me to be home alone, so he drove me up to the mountains. One morning during my stay, Betty and Charley drove Betty’s mother to Atlanta for a doctor’s appointment. I didn’t tell Betty this at the time, but I spent most of the day driving pell-mell all over those 28-acres on a John Deere Gator. It was sprinkling rain and the power was out thanks to a tropical storm that had moved through the area the night before. I didn’t have anything else to do–no cable, no internet, no power–and I figured limited physical activity included sitting in a Gator and pushing the gas pedal. Of course, when they returned that evening, I was sitting on the couch, “reading” a book, acting like I’d had a boring day at home.

This time, though, they weren’t coming back.

I walked in to this silent, still house. Normally, Betty is at the door, arms open wide, smile even wider, Charley a few feet behind with a welcome grin on his face. This time, the only thing that greeted me was the wind chimes on the back deck, tolling a mournful song each time the wind blew. I slowly started upstairs, making my way to the room where Charley painted, and couldn’t make it. I sat down several steps from the top and just lost it. I joined in on whatever song the wind chimes had composed. 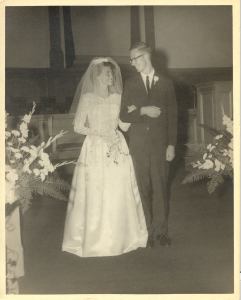 Entropy, first defined in the 19th century by German physicist Rudolph Clausius, comes from the Greek word for transformation and it is central to the second law of thermodynamics. At its most basic, entropy can be described as the natural tendency of all systems to evolve towards ever-increasing disorder. The first law of thermodynamics says that energy cannot be created or destroyed. Simply put, it’s transformed. But, the quality of the energy decreases and that’s where the second law of thermodynamics comes in to play. It states that as the energy is transformed, more of it is wasted each time. It also states that it’s the natural tendency of any isolated system to degenerate into a more disordered state.

I don’t know what the hell is more disordered than two people you dearly love dying within three weeks of one another.

After I pulled myself together, I walked into Charley’s art room and took in the chaos around me. Charley’s outlet was oil painting and he could transform a canvas into a gorgeous landscape. The room was covered in oil paintings. Canvases everywhere, full of flowers, waterfalls, trees, landscapes, beaches… you name it. The painting I was there to retrieve was an extremely large canvas depicting the Nā Pali coast of Kaua’i, Hawai’i, for Tyler and I. Charley had never finished it and seeing it there, on his easel, it perfectly depicted a life interrupted. Entropy. Tyler and I had mentioned to our friend, John, that there might be a painting we would want him to finish. But looking at it on that Monday, I wondered if we should just leave it alone. Hang it, unfinished. Or, destroy it. Convert that energy to something else.

No matter how many people were in the house in Suches, it held laughter. Betty’s loud, boisterous laughs. Charley’s low chuckles. The various high and low, fast and slow titters of whatever family and friends were visiting. It always made me happy, being in that house. Because I was always surrounded by love. With such an uncertain standing in my own family, the mountain home of Betty and Charley Dobson was my safe haven. I could hike the Appalachian Trail, sit at the foot of waterfalls, walk through rhododendron forests, or sit on a thick bed of moss and just listen. And, when I was done recharging, I could walk through the front doors and be unconditionally loved for who I was and am. There were no lies in Suches. No subterfuge. Just pure acceptance.

The living room was full of boxes, overflowing with photo albums, tchotchkes, books, and what-not. Several years ago, when Betty and her siblings moved their mother to a care home in South Georgia, they emptied her house of her belongings, trying to decide what should go, stay, or be passed on. There had been some minor family strife over it and I remember saying to Betty, “I don’t want anything when you are gone. Because the only thing I’m going to want is you. And I can’t have you. So, I don’t want anything.” I still feel that way. As I walked past those boxes, knowing that the closets of this home were still stuffed full of tangible things, I shook my head at them. I gathered up a few pictures of my three children and saw, sitting off to the side, a set of glass mixing bowls I had bought Betty this past May for Mother’s Day. I cried again and decided to take those. They couldn’t bring Betty back, but maybe they could bring me a smidge closer to her.

The morning after Charley died, when Tyler returned home, he sat down next to me and told me everything. I held it all in pretty well. I had told the kids and already shed a few tears, but I was doing OK. And then? Tyler handed them to me.

Back before the advent of calculators, slide rules were used by physicists and mathematicians to make complicated calculations. And these slide rules had been used by Charley throughout his high school years, while studying physics at Georgia Tech and when he taught physics at a local college. The slide rules are worn, well-used, and I pretty much lost it. For a physicist, the slide rule was more important than any other tool. Those objects radiated his energy. For a moment, there was no entropy. It was just me and my Chuck.

I had always told Tyler, “Hey. Many years from now, when you inherit that property, if we end up living there, I’m cool with that. Just give me my DirecTV, decent Internet, and a free weekend each month to go hang with friends, and I can live there.” 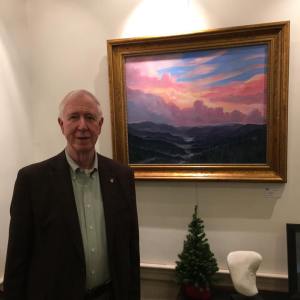 Now? That’s happened and far too soon. As I stood in that empty house, full of furniture and memories, silent, with no Betty or Charley to give me their love and support, wisdom and advice, I couldn’t stay any longer. I felt like an interloper. I felt like there was no way I could live up to what they had created. I don’t know what will happen to Alpenrose. But right now? It hurts too much to be there. I drove back down the mountain to Dahlonega, walked in to the funeral home, and cradled the second box full of ashes in as many months. I drove all the way home with my hand on the top of what was left of my dear father-in-law and talked to him.  As the years went by after my father’s and uncle’s deaths, it bothered me more and more that the three months before their ashes were buried, they were hidden behind a door. Charley and Betty are on our side table, in the family room, right in the middle of the most active part of our house, a part of our family until they are scattered in accordance with their wishes. I wouldn’t have it any other way.

This site uses Akismet to reduce spam. Learn how your comment data is processed.

I wish I was Wonder Woman, but I'm actually a wife, mother of three, author, paranormal investigator, and a stay-at-home astronaut. When I'm not terrorizing the Bible Belt PTA with my purple hair and "Hail Satan" shirt, you can find me at home, binge-watching "Charlie's Angels."